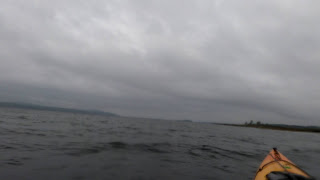 As an avid outdoorsman I find peace in being outside. Hunting and fishing are a rest to life for me. When the opportunity arose to try something new and sea kayak I did it. It's a little out of my realm from running bird dogs and beagles on my weekends. But trying new things and experiencing what bring others joy in the outdoors can help give a new perspective. 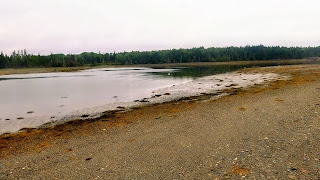 The first leg if the trip was. 4.5 miles all in the pouring ran out to an island off the coast of Maine. With a few chances to fish on the way out the makerel were around but no bites to be had. It was filled with wildlife. There was many of seals, a few porpoise,  some eiders and many more bird species. It was a scenic view on the way to the island for lunch and a hike. 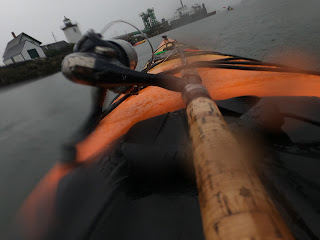 The trip back the rain stop and the fish struck just off the shore of the island. There was two of us fishing and to fish aboard. That would be the last of the fish caught though the effort was there. With the paddle the paddle back to the main land the wind picked up across the open bay. The paddling became steady with no breaks just to make headway untill the other shore gave some relief. Once the 3 mile marathon paddle was over the coast broke the wind where some more unsuccessful fish was had. 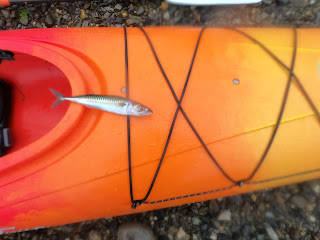 9 miles was done for the day and one angler hooked on kayak fishing in the ocean. There is something soothing about paddling in the ocean with the tides changing and the abundant wildlife all around then pulling a fish from the water just inches from where you sit. With he makerel it is usually used for bait for the more sought after fish the striper but this one was destined for the dinner plate. Never trying one before I decided to see if they were more then just a bait fish. Cooked on the grill with garlic and lemon it was a mild tasting fish and one I would eat again.

Popular posts from this blog

February 21, 2021
The comforts of a big ice shack make it feel like home. Having almost anything from a oven, tv, and bed. While also leaving you in one spot day after day. While fishing From the same location and the same pond can be nice at times. Being able to get out and fish new territory weather it's a new spot or a new pond brings on a new challenge.  The ability to be mobile while ice fishing gives you more flexibility and opportunity fishing. Being able to change locations on a lake with a quick and simple pack up could mean more flags on a slow day. Scouting a new pond means you can change locations a few times to find fish. No longer do you have to fish the same pond every time out because of the big shack. The gear that makes you ready to get out there and be mobile is a gear sled, portable ice shack, small heater.  For an ice shack a shelter made onto a sled is very nice for the fact that you can haul all your stuff out in it. Setting it up  is a breeze and some even come with built in
3 comments
Read more

March 08, 2021
Running beagles In a pack can make the hare hunting experience mind blowing. The music that a pack of dogs make through the quiet woods is exhilarating. It is very practical to run dogs together when hunting. In a pack there is more dogs to find the rabbit and keep the trail.  What happens when you find your self down to one dog. Dogs unfortunately get hurt, come in to season or it might be something different and they need some time off. How is the single dog going to react. Some will take off like nothing is different and others will act like they have never been out before.  Why not solo hunt dogs during the season? It a tough thing to leave dogs home that are ready to go but maybe the best thing for your pack. In any pack all dogs should run the rabbit solo with no help from other dogs. During the season a dog running only in a pack can start to rely on the other dogs. The ones with the stronger noise or faster legs could leave your pack weakening each time out leaving the other d
1 comment
Read more

October 04, 2020
The small game season has began. The second day of the start to my season happened at hunting camp. It has been a staple of where grouse hunting happened for me as a kid. It's just a small cabin tucked in the woods of northeastern Maine. Pulling up the camp road brings excitement and anticipation every time. .   This trip would begin early. Up in time to make the two hour ride north. The first stop would be at camp. With the wind we had this spring and end of summer cutting trees was necessary to get in. Quick fall cleaning then time to get the dogs ready for the day             Two seasoned German shorthaired pointers that that I received in the off season were ready to go. The anticipation was high to hunt with these dogs and they didn't disappoint. With many points and no bird shot over the dogs they hunted hard and found birds. Missed shots was the issue this day.     With one bird bagged in what was bad timming for the grouse. While walking down a road the dogs working
1 comment
Read more